This is a photograph of Luna Park Coney Island New York, the photograph was taken in 1912 as you can see labeled on the photograph above in white. What we see in the photograph is an immense amount of American flags and banners on almost every lightpost and as well as on the front of many different buildings. If we look down the street a ways, we can see a banner that stretches across the street that reads “Mardi Gras Sept. 9th – 14th”. This tell us probably that the photograph was taken a little before that monthly date as it is an advertisement for an upcoming event on Coney Island. On this photograph you can also see the various businesses labeled on this street, for example if you look around the beginning of the street you can see a Shooting Gallery Amusement business and a Bakery right next door. Farther down the street on the left side of the street, you can see a sign that reads “Kister’s Hotel” with “Schlitz” written vertically below the hotel sign. Prodominatly though we see Luna Park comprising much of the photograph in which the area stands out with overzealous decor displaying an amusement park / funhouse look. 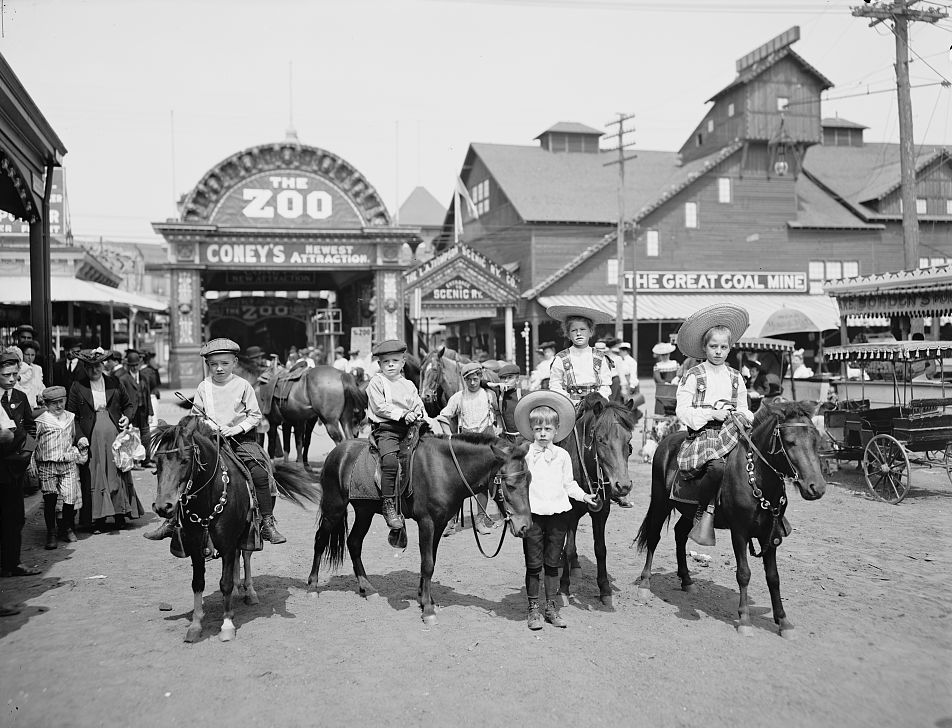 Here is another photograph on the inside of Luna Park. This photograph was taken in 1904 and displays many people as well as businesses throughout the Luna Park area. Obviously the focal point of this photograph displays a few young children going on Poney Rides inside the park. In the background of the picture we see various businesses labeled such as “The Zoo Coney’s Newest Attraction” and “The Great Coal Mine”. 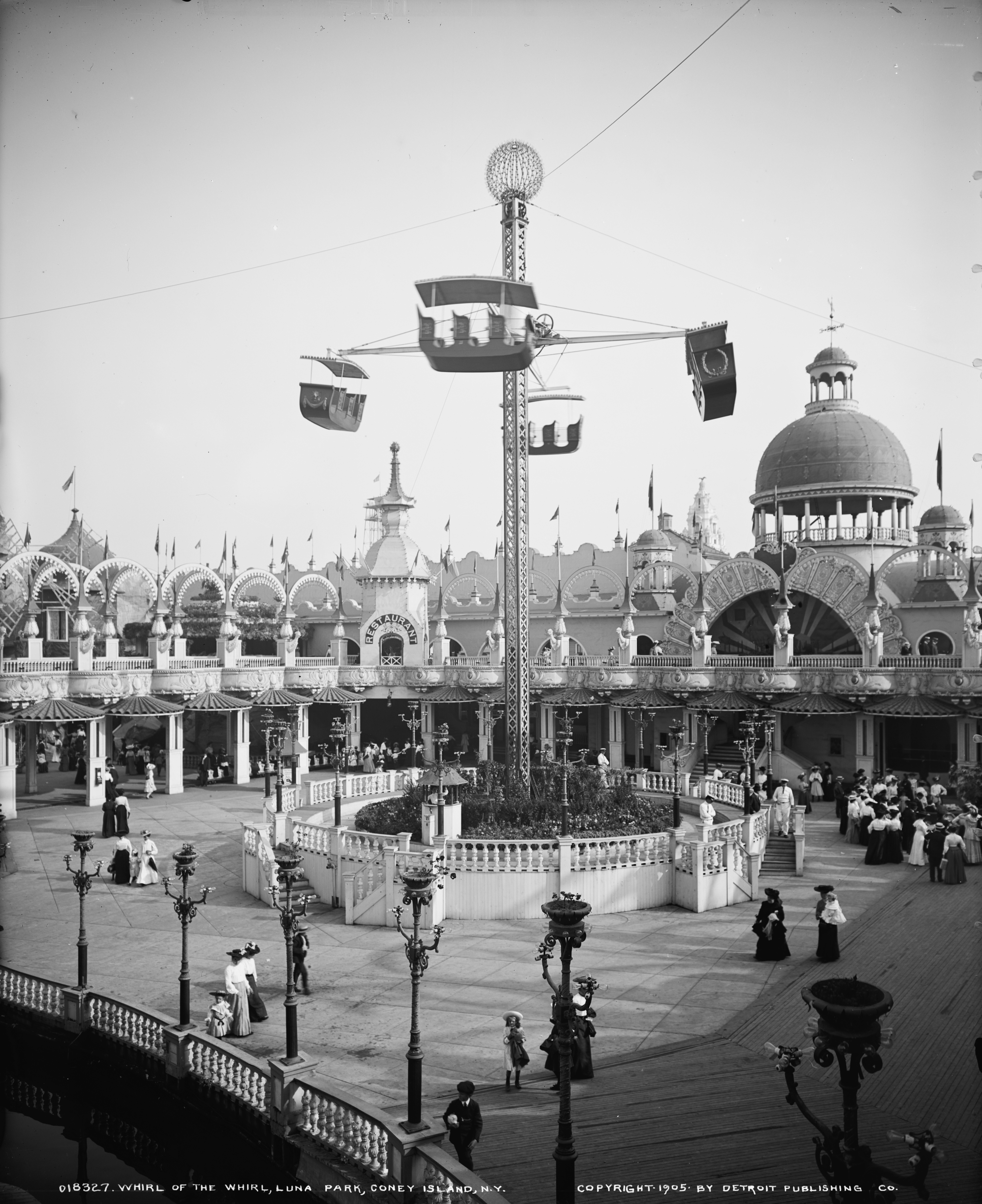 This photograph specifically displays an amusement park ride that was in Luna Park Coney Island. The ride name is “Whirl of The Whirl” and the photograph was taken in 1905 as it is labeled in white text at the bottom of the photograph. As you can see the ride seems to rise to the top of the vertical pole and spin the carts horizontally. In the photograph, if you look closely, you can see a slight motion blur which mean that the ride is in motion at the exact time this photograph was taken. Though nobody is in the carts, I feel as if they ran the ride even without people in order to garner attention for the ride. The central pole structure that holds the horizontal carts seems to be held in place with 3 extremely long cables that extend to the outside of the photograph. If you look closely at the base of the ride you can see a kiosk with a woman with a white shirt working the booth. Just below her you can see a narrow box with the number “15” written in big text at the top. What I cannot tell is if this “15” is a location point for the Luna Park Map, or is it the cost of attendance for the ride. From the previous photographs we begin to notice a 10 cent fee for some of the smaller rides. The cents symbol is definitely missing, which makes me unsure that it is the cost of the ride. If you look to the right of the ride on the ground level, you see a large crowd of people gathered. Upon zooming in more closely I see that they are gathered around a table with 2 men sitting down at it. I cannot see though what they are doing.

This is kind of an amazing photograph. What we see as the focal point of the photograph is an amusement park ride at Coney Island that is labeled as the “Dreamland Chutes”. The photograph was taken in 1905 and displays a ride that seems to be a water slide ride that utilizes individual boats that skip across a body of water upon impact. It’s interesting how they’ve designed it, even more so with a bridge that travels over the body of water for which the chutes riders travel. In the photograph you can see the gatherings of people across the bridge watching the amusement park ride in action.

These are just 5 of the photographs we have in our historical collection. We will be continuing with various examinations of Coney Island historical photographs. If you wish to see specific photographs please don’t hesitate to leave a comment below or email us at Bravuramedia@yahoo.com